I am advancing in years slightly and so as anniversaries, Christmas and birthdays roll around it is difficult to buy me gifts. Especially combined with the fact I tend to just buy myself things that I want, when I want them and the fact that I am not really materialistic. What do you buy the man who has all he needs, and doesn’t want anything – a constant issue for my partner, family and friends.

However, I am a petrolhead, as evidenced by my recent car history Mini Cooper S, Seat Leon FR, Audi TT. So this is a saving grace. I have a number of lovely coffee table books on fast cars (a three volume tome on the history of McLaren being one of my favourites), and other car related items.

For my birthday last year though, I was lucky enough to get an activity day voucher. A 2 car driving experience with Car Chase Heroes. The  voucher meant that I was able to choose the track, the cars that I wanted to drive and have a ‘hot lap’ with a professional driver in an Ariel Atom.

There are (at the time of writing) 15 locations to choose from dotted all over England. I chose Abingdon Airfield, as it is fairly local. So we rocked up on a delightfully sunny Saturday morning, very excited, shades and voucher in hand.

The check in process was quick, friendly and efficient. Once checked in it was into the command centre to choose which cars I would drive (there are up to 34 to choose from). I chose the Roush Mustang (I have been a fan of the Mustang since a fly drive down the Pacific Coast Highway a number of years ago) and a Chevrolet Camaro ZL1 (Bumblebee). Out to the waiting/viewing area for a driver briefing and then wait to be called for my laps.

I had paid for a sighting lap, and so got driven around the track in a BMW 320 by a Car Chase Heroes driver. On the drive (which was fairly quick) he pointed out to us braking points, where to be looking, where to position the car on the track to get the best balance of performance and handling.

First up was Bumblebee a 600bhp, supercharged 6.2L V8 American Muscle car, painted yellow and black like the character Bumblebee in the Transformers movies. I jumped in next to the instructor (race driver), introduced myself, had a quick talk through instructions and buckled up.

We were ready to roll, we crawled out down the pit lane ready to enter the track when a gap emerged. Up until now we had just had a trailing throttle to take us to the track edge, the time had come to drive well. Half throttle advised the instructor (I did think is that all), and we surged forward (well called on the half throttle fella). Out on the track and being advised on brake points and when to accelerate and how much, it was a blast.

We were lucky and we had joined in a sweet spot, cars in front but far enough away that we could have fun, faster cars coming up behind (Ferrari and Lamborghini) with plenty of space for them to pass with us on a trailing throttle not having to brake. Fun was definitely had, the acceleration of the car was insane, the grip was remarkable, and the smile on my face huge.

I was very disappointed to head back to the pits. You can buy extra laps while in the car if time available, but I still had more to drive.

A small wait later, after watching some of the other laps I was called for my second drive. This had a 5L V8 but no supercharger so ‘only’ 435 bhp. Which was great as it meant it had to be worked harder to get performance.

It was just as much fun as the Camaro, more effort, more reward. Although less powerful it was just as agile and handled brilliantly on fast laps. A little more work with braking, apexing corners and carry speed with you gave just as much enjoyment, if slightly less speed.

This is where you really appreciate the input from the talented instructors. I was certainly driving smoother and faster with the pointers and tips. Really they were little observations and hints, so easy to adjust to.

Another short little wait and it was my turn to climb (literally) into the Ariel Atom, for a hot lap with a professional driver. Helmet on for this ride, as you can see there isn’t a lot of the Atom, the helmet was essential.

This was so exhilarating. I have no idea how to explain to you the sheer force of the acceleration, it is like nothing I have felt before. The open frame, the noise of the engine just behind your head, and the proximity of your ass to the ground. All of these combine to make it a mind blowing experience.

Your head being snapped side to side by the cornering forces. The skill of the driver, powering through the smallest of gaps to overtake. The precision of placing the car perfectly on line to be able to hold speed, and be back on the power as early as possible. 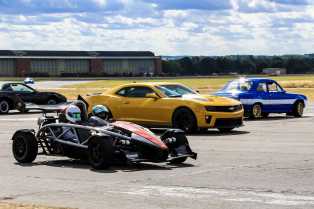 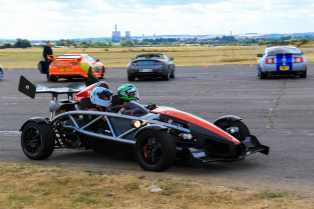 I thought I had been quickly around the track on my laps, but my word, it was like I had been in a pedal car. Two laps in the Atom was enough to leave me smiling massively. What a way to end the day.

After the hot lap we made our way to the photo trailer, I bought all pics of me on a USB, and one printed copy of me driving the Camaro. But what I really took away was a lot of great memories and slightly improved driving.

If you love cars, why not give it a go?

I’m Pete, a guy in his 40’s living in North Wales. I like to travel, love food, and can often found wandering aimlessly around taking photos.

Here I share my views on life, career and personal development, with a few random thoughts.